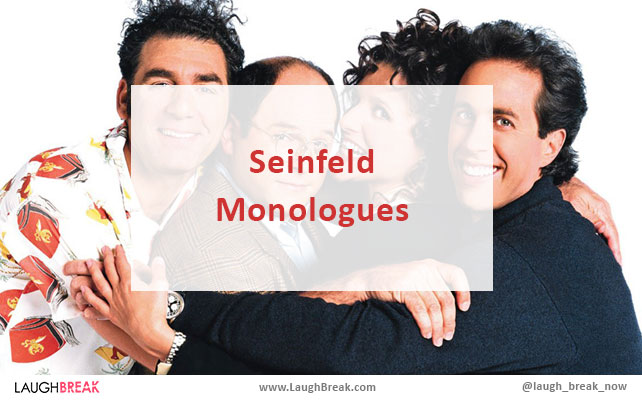 With any kind of physical test, I don’t know what it is, I always seem to get competitive. Remember when you were in school and they’d do those hearing tests? And you’d really be listening hard, you know? I wanted to do unbelievable on the hearing test. I wanted them to come over to me after and go, “We think you may have something close to super-hearing. What you heard was a cotton ball touching a piece of felt. We’re sending the results to Washington, we’d like you to meet the President.”

Somebody just gave me a shower radio. Thanks a lot. Do you really want music in the shower? I guess there’s no better place to dance than a slick surface next to a glass door.

It’s tough to do a good deed. Let’s look at your professional good-deed doers, your Lone Rangers, your Supermen, your Batmen, your Spidermen. They’re all wearing disguises, masks over their faces, secret identities. They don’t want people to know them because they cause too much aggravation. “Superman, yeah thanks for saving my life, but did you have to come through my wall? I’m renting here. They’ve got a security deposit. Now what am I supposed to do?”

I’m on the plane, we left late, and the pilot says, “We’re going to be making up some time in the air.” I thought, “Isn’t that interesting. They just make up time.” That’s why you have to reset your watch when you land. Of course, when they say they’re making up time, obviously they’re increasing the speed of the aircraft. Now my question is, if you can go faster, why don’t you just go as fast as you can all the time? “Come on, they’re no cops up here! Nail it! Give it some gas! We’re flying!”

The worst way of flying, I think, is standby. You ever fly standby? It never works. That’s why they call it standby. You end up standing there going, “Bye.”

Frankly, I don’t believe people think of their office as a workplace anyway. I think they think of it as a stationery store with a Danish. You want to get your pastry, your envelopes, your supplies, your toilet paper, six cups of coffee, and you go home.

Then there’s the psychiatrist. Why is that with the psychiatrist every hour is only fifty minutes? What do they do with the ten minutes that they have left? Do they just sit there going, “Boy that guy was crazy. I couldn’t believe the things he was saying. What a nut. Who’s coming in next? Oh no, another head case.”

Talk-show hosts never seem to have any idea how much time is left in the show, you know? They’re always looking off camera, “Do we have time? Are we out of time? How are we doing on time?” You never see Magnum P.I. go, “Should I strangle this guy or are we gonna take a break here? Can you stay for another beating? I’ll tell you what, I’ll bop him in the head, we’ll do a commercial, we’ll come back, I’ll drive in the car real fast. Stay with us.”

The main difference between the man’s wallet and the woman’s wallet is the photo section. Women carry with them a photograph of every person they’ve ever met every day in their whole life since the beginning of time. And every picture’s out of date. “Here’s my cousin, 3 years old, she’s in the Marines now. This is my dog, he died during the Carter administration.” They get stopped by a cop, no license and registration. “Here’s my fifty-six people who know me.” Cop goes, “Alright ma’am, just wanted to make sure you had some friends. Move it along. Routine pal check.”

I will never understand why they cook on TV. I can’t smell it. Can’t eat it. Can’t taste it. The end of the show they hold it up to the camera, “Well, here it is. You can’t have any. Thanks for watching. Goodbye.”

Sometimes you go to a nice restaurant, they put the check in the little book. What is this, the story of the bill? “Once upon a time somebody ordered a salad.” There’s a little gold tassel hanging down. Am I graduating from the restaurant? Should I put this on the rearview mirror of my Camaro?

One thing I love about living in New York is it’s every different type of person piled one on top of the other. I am for open immigration, but that sign we have in the front of the Statue of Liberty, “Give us your tired, your poor, your huddled masses.” Can’t we just say, “Hey, the door’s open. We’ll take whoever you got.” Do we have to specify “The wretched refuse?” Why not just say, “Give us the unhappy, the sad, the slow, the ugly, the people that can’t drive, people that have trouble merging, if they can’t stay in their lane, if they don’t signal, they can’t parallel park, if they’re sneezing, if they’re stuffed up, if they have bad penmanship, if they don’t return calls, if they have dandruff, food between their teeth, if they have bad credit, if they have no credit, missed a spot shaving… In other words, any dysfunctional, defective slob that you can somehow cattle prod onto a wagon, send them over. We want them.”

Sunday’s paper is the worst. Weekend. You want to relax. “Oh, by the way, here’s a thousand pages of information you had no idea about.” How can they tell you everything they know about every single day of the week and then have this much left over on Sunday when nothing’s going on?

More Funny Clean Jokes for You:

This site uses Akismet to reduce spam. Learn how your comment data is processed.

If you are not sure what jokes to read, click the button below for random jokes!